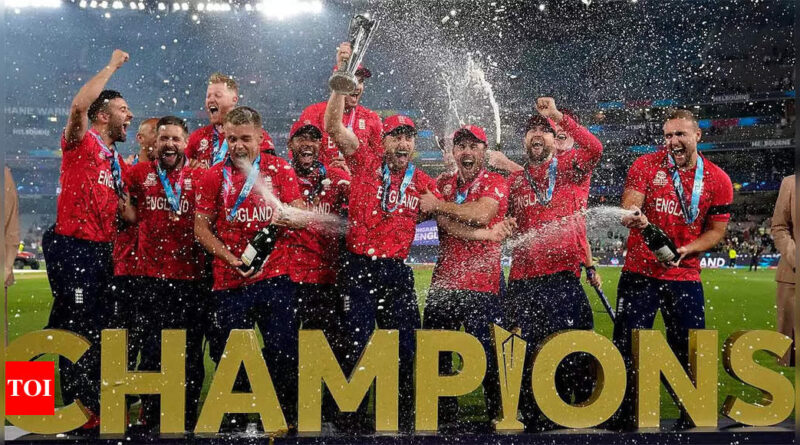 England are now the only team in history to simultaneously hold both ODI and T20 World Cups
MELBOURNE: Not rain. Not 1992 redux. Not Babar Azam. Not Shadab Khan. Not Shaheen Shah Afridi, who pulled out of his runup and hobbled out after one delivery in the 16th over to symbolise Pakistan‘s day. Not an army of green. Not destiny. Just Ben Stokes.
AS IT HAPPENED: ENGLAND VS PAKISTAN
In the end, in another World Cup final, in another famous England white-ball triumph, it’s Ben Stokes. The man who owns the big moments. Who waits till the tide turns his way. Who starts out batting like a cat on a hot tin roof on a bouncy MCG, against a fierce array of Pakistani pace, and ends up being its emperor supreme.
Ben Stokes, the greatest match-winner of his generation. You will remember the name forever, Pakistan. You will have it on your lips for the next few weeks.

Arguably, Stokes had a strange sort of tournament with the bat coming into the World Cup final: 2 vs Afghanistan, 6 vs Ireland, 8 vs New Zealand, 42 not out vs the Lankans. Not his usual fluent self. Not in T20Is in Australia at this time of year.
But this is a World Cup final. A seemingly gettable chase after England’s formidable bowling prowess boasting Sam Curran (3/12 off his four), Adil Rashid (2/22) and Chris Jordan (2/27) slow-chokes the lifeout of Pakistan’s batters and keeps them to 137/8.

It is a tricky chase made trickier by England’s bold approach with the rain threatening: they keep losing wickets but refuse to take a backward step and ensure they are always ahead of the DLS over-byover par scores at all points.
This is what England do. They attack and then counter-attack. Even when Shaheen Shah Afridi does his Shaheen Shah Afridi thing, clattering Alex Hales’ stumps first over. Even when Jos Buttler goes. Or Phil Salt is unable to force the pace.

England lose three wickets in the Powerplay but they still keep going at more than eight an over. They know something Pakistan don’t: keep calm and just do your thing when Ben Stokes is batting at one end in a World Cup final.
What a time for Stokes to bring up his first T20I half-century (52 not out off 49b; 5×4, 1×6). Arguably the 98-ball 84 not out against New Zealand in the 2019 ODI World Cup is the greater knock, but this wasn’t a pretty effort and Pakistan’s bowlers maintained the illusion of staying in the hunt throughout.

<p>Ben Stokes and Sam Curran starred as England edged Pakistan by 5 wickets to win the T20 World Cup and become the sport’s first dual white-ball champions, holding both the 50 and 20-over titles.</p>

<p>Jos Buttler’s side held Pakistan to 137-8 in front of a partisan 80,462 fans at a heaving Melbourne Cricket Ground, with player-of-the-match Curran bagging 3-12 and Adil Rashid chipping with 2-22.</p>

<p>In reply, England slumped to 49-3 in the sixth over as they struggled to get any momentum against a fiery pace attack, with boundaries hard to come by.</p>

<p>But Stokes (52*) and Moeen Ali (19) used their experience and cool heads to guide England to 138-5 with six balls to spare, climaxing a riveting tournament that spanned 45 games over nearly a month.</p>

<p>The victory added to the 50-over title England won in 2019, building on the legacy of former captain Eoin Morgan, who retired this year after transforming the team into a white-ball juggernaut.</p>

<p>It was England’s second T20 crown after tasting success in 2010, joining the West Indies as the only two-time winners since the tournament’s inception in 2007.</p>

<p>The game was billed as a showdown between Pakistan’s attack and England’s top order, and Shaheen Afridi bowled dangerman Alex Hales in the first over of the run chase.</p>

<p>The ball was swinging and seaming and the menacing Rauf claimed the key wicket of Buttler just as he was getting in, edging to wicketkeeper Mohammad Rizwan on 26 off 17 balls.</p>

<p>The runs dried up and Harry Brook needed treatment for a blow to his elbow but he soldiered on as they reached 77-3 at the halfway point of the innings. It came down to needing 41 runs off the final five overs.</p>

<p>Stokes relieved the pressure with a four and a six off Ahmed and there was no stopping them with the England all-rounder hitting the winning runs.</p>

<p>Rizwan and Babar Azam shared a century partnership in their semi-final against New Zealand, but another big stand wasn’t to be, with Rizwan dragging a delivery from Curran on to his stumps on 15.</p>

<p>The introduction of Rashid soon after the six-over powerplay reaped an immediate reward with Mohammad Haris (8) attacking him on his first ball only to give a simple catch to Stokes.</p>

<p>But once again Rashid got the breakthrough, pulling off a diving catch from his own bowling to claim the vital wicket of Azam, whose 32 came off 28 balls.</p>

<p>Ahmed only lasted six balls before Masood and Shadab Khan (20) fell in the space of two runs as Curran and Chris Jordan kept the lid on any hope Pakistan had of a late flurry.</p>

“Stokes wasn’t his usual fluent self but he wasn’t giving up without a fight,” Buttler said later. By the end of 15 overs, England still need 41 from 30 balls. Stokes has eked out only 28 off 35 balls, with three boundary shots. But he believes in his aura. No going back now.
Overs earlier, Shaheen Shah had injured himself sliding to take a catch to get rid of Harry Brook. Now he is back on the field,but that right knee which threatened to keep him out of the tournament is still dodgy and he pulls out of his run-up. The MCG, all green flags and “Pakistan zindabad” chants, gets up as one to leave.

ON TOP OF THE WORLD 🦁 https://t.co/CrpaPCfx1o

Stokes is waiting for his moment. He gets it. Afridi leaves the field. Iftikhar Ahmed steps in. Second last ball of the over, Stokes blasts one through cover. Four. Next ball, six, soaring over long on. England are in charge. Only 28 from 24 now.
Moeen Ali, buoyed by the occasion and the presence of Stokes, clatters Mohammad Wasim for three fours and it’s done and dusted. When Wasim gets Moeen with a yorker in his next over, the 19th, the departing crowd stops in its tracks. Will there be magic? Is it written? But Stokes gets a full toss outside off and brings up his fifty with a four. He is the man in charge, not Pakistan.

👌 Second-highest wicket-taker🏅 Player of the Match in the final💥 Career-best figures in the tournament⭐ England’… https://t.co/ArVxOTXZDs

And then the winning runs and a five-wicket victory, and Stokes has refashioned World Cup glory for England. He raises his arms, pumps his fists in the air as if at an imaginary enemy, and then removes his gloves and throws them to the ground. It is a very Ben Stokes celebration, letting off steam after a scrappy, under-pressure, nervy chase. Then his teammates rush out and swamp him. “We were a bit nervous in the dugout,” Adil Rashid, who spun Pakistan into knots earlier, was to say later, “But we knew Stokesy was there. Of course, he is only human, but the thing with Stokesy is that he is a matchwinner.”
Along with Rashid, Sam Curran, like he has all throughout this tournament, did his thing in the Powerplay and at the death, getting rid of Rizwan early and then coming back to dismiss Shan Masood and Mohammad Nawaz.

#T20WorldCup celebrations are better with family and friends 🥰 https://t.co/12WDiEjGxW

And then it all boiled down to Stokes, who scratched around for form but hung in there, knowing it was a World Cup final, never mind the miscues and dot balls. England are now the only team in cricket history to simultaneously hold both ODI and T20 World Cups. And one man was front and centre in both wins. The legend of Stokesy the match-winner is now part of English cricket lore.
Stokes told the host broadcaster, “In finals, especially chasing, you forgot all the hard work that came first. To restrict them to that total, the bowlers have to take a lot of credit. With Ireland (who upset England in the group stage) being so early in the competition, we had to address it. We can’t carry baggage in tournaments. The best teams take it on the chin and move on to the next challenge. A pretty good evening.”

Not so much for Pakistan, who will have to go back to the drawing board and face the elephant in the room: their batting approach in the Powerplay. 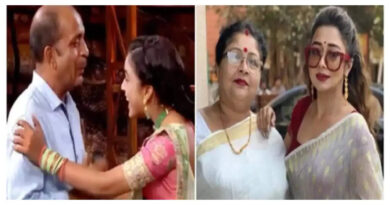 Exclusive – Sumbul Tougeer’s father to Tina Datta’s mom: I apologise for my words, but your daughter has been character-assassinating Sumbul for last 50 days 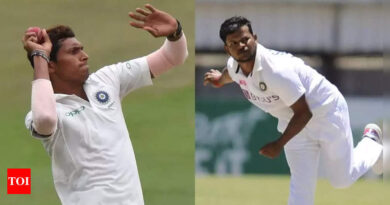 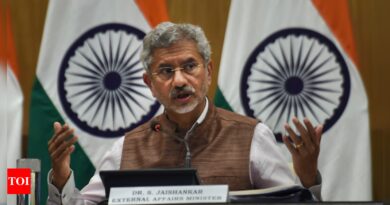